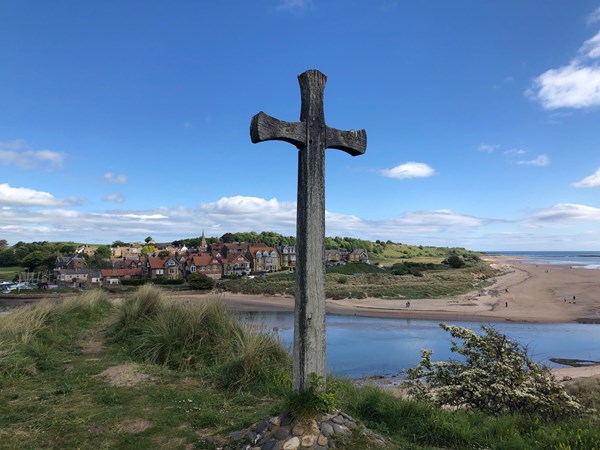 Recently I set off by myself to walk the St Oswald’s Way pilgrimage route in Northumberland. Backwards, as it happens. From Heavenfield near Hexham, near where St Oswald defeated Cadwallon’s pagan army in c.634, up to Holy Island, and then on to Berwick. I wanted to save the coast for last. The purpose of the journey was discernment. I would take 8 days alone to walk through the Northumbrian countryside and up the coast, praying and thinking, with a copy of Bede’s The Ecclesiastical History of the English People in my rucksack.

There were questions about vocation with which I wanted to wrestle. But I realized that alongside that, deep down it was a Romantic quest. I wanted to find England. Or, more precisely, I hoped to imagine what it was like for the Northern saints ministering to the people in Anglo-Saxon Britain. Perhaps it might help me to think about what it means to serve the people living on this island today. Because it seems to me that we’re struggling to work out who we are as a nation, as a people. As peoples. Maybe following in the footsteps of the saints might just give some insight into how the church – including me – could minister in the present moment.

As it happens, I didn’t manage to come up with a fix for Brexit. I did, however, find encouragement for my soul along the way. My brain relaxed and then warmed up. I learnt a lot too about my body. Like which knee hurts going up hill and which knees hurts going down hill. (There isn’t a lot of flat in the Northumbrian countryside.)

At the beginning I thought that, even though I am a confirmed introvert, I might be lonely. I had removed my social media apps, although I was contactable (on a phone that was meteorologist, torch, OS map, travel agent, bank, pedometer and camera). But I soon found my rhythm. Where the route intersects other paths (coast to coast, along Hadrian’s Wall, the coastal path, St Cuthbert’s Way) there were plenty of other walkers. As far as I’m aware, on the sections that were only marked as the St Oswald’s Way, I didn’t meet a single pilgrim. But I wasn’t lonely.

It was crossing the sands to Lindisfarne that I was able to articulate why. I had decided not to walk along the road but to follow the pilgrims’ route directly across the stretch of sand that is underwater at high tide. You have to set off at just the right moment so that the waters have receded but so that you’re not walking into a rising tide. It’s a little hair-raising (if admittedly, like me, the most dangerous daily threat is your phone battery running down or a puncture). 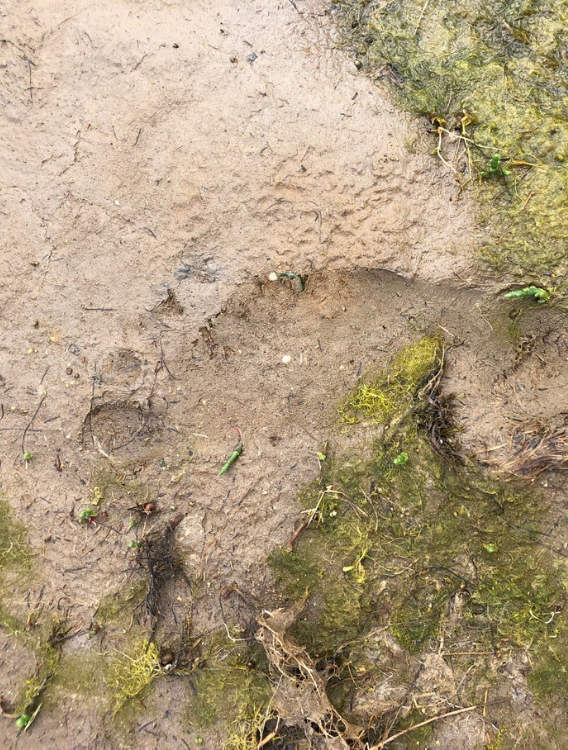 Although the tide had been in and out, the muddy sands were covered in footprints. Small, large, booted, barefoot. The ghostly presence of scores of other pilgrims mark the ground. Here, where the monks of the monastery would have crossed, where Cuthbert and Aidan walked, I followed the same well-worn path.

I had several people praying for me as I walked. I was carried by brothers and sisters in the faith who would send encouraging texts. I knew that I carried with me people for whom I was praying. Ordinands nearing ordination, grieving friends, people in physical and mental distress, loved ones, those for whom walking is a forced migration. The cost of carrying is more than evident when you have your life on your back. The necessity of sharing the yoke, of being carried, is thus equally evident. And also, I was aware (thanks, Bede) of the lives of those whom I was following across the years, over the changing terrain, through the dwellings and communities of the land. Able to follow them because they had left a path, preached a faith, bequeathed a church.

Christian social ethics often makes much of the social nature of the church. That the church, insofar as it lives by the peace given by the risen Jesus, insofar as it lives out charity and practises reconciliation, is a vision of society in its fullness. Not a means to an end but a foretaste of eternity. I don’t think I had been made so aware of the sheer social power and depth of the church for some time. But I felt it – profoundly – when, oddly enough, I was on my own.

Another strand of Christian social ethics points to the church’s engagement with wider society. The church offers judgement on the spirit of the age and the communities it produces. It encourages the good, offers critique of the ways society falls short, recommends paths to follow. And the church offers salt and acts as yeast, because the church is a thousand thousand people living amongst others. It is countless acts and spoken words – micropractices of charity – wherever people encounter one another. The church makes its distinctive contribution whilst it lives within other communities, alongside allies, when making common cause and seeking goods together with its neighbours.

That too was manifest as I experienced the inescapably territorial nature of the parish system. Passing by lambs, any of which might owe their life to a quadbike arriving in the cold of the night, watching tourists traveling to the Farnes alongside fishing boats, spying cargo ships afar off, walking through towns and nipping into shops and pubs, crossing train tracks and skirting bird sanctuaries, looking for the military jets out ahead of the roar of their engines, the human ecology impinges everywhere. In the midst of all that, I prayed evening prayer most days in the churches of the parishes where I was to find my lodgings for the night.

I am more than used to going to church. I have been to so many in so many places. But there is something encouraging about walking across parish after parish, popping into open churches, then passing on to the next as one walks across the country. They are nodes nestled in the midst of everyday life that gather that dispersed life of a people and that offer the works of the week to God, renew the people as one body, and send them out again. It’s like a relentless tide that can shape and smooth the hardest hearts. 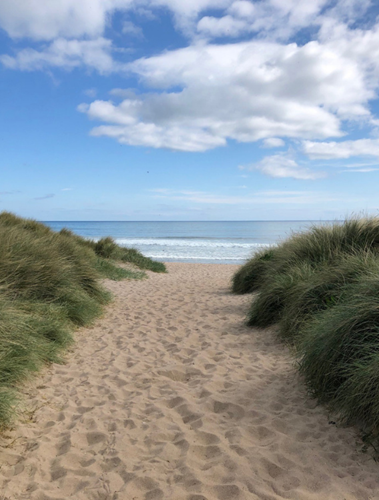 As for Brexit or the mission to the postmillennial Angles, I wasn’t gifted a divine policy. No buses drove by with enlightening godly slogans. Here where Neolithic cup and ring marks, Roman walls, Elizabethan fortifications, eighteenth century follies and anti-tank blocks humble the transient pedestrian, I passed through the countryside leaving little trace except footprints in the sand and empty packets of ibuprofen in the bin. But I found myself aware of the presence of the church. Through mutual prayer and being yoked. Through the traces of a Christian history carved into the North East. By reading the noticeboards of churches engaged in their places and with their peoples.

I was struck in Bede by the vocation to holiness that was a mark of those called to public ministry. It was a holiness that commended men and women to others; which attracted. It was never a holiness that was otherworldly, naïve or ethereally disembodied. It was a holiness that set apart faithful people in such a way that, from the perspective of sanctity, they could view all people as equal under God, each infinitely important, each distinctively peculiar (if you have not read the account of Aidan’s horse, it’s fantastic: The Ecclesiastical History III, 14). It was a holiness forged in prayer and worship, practised in company, by those who were mobile and attentive to the people they met in the places to which they ventured. They weren’t subject to formation criteria, sent on leadership courses, made to submit dissertations – (I am not against any of these things by the way) – but were chosen and sent because they were Christlike. They called strangers to be friends in the faith and formed a church by the grace they passed on.

I know it’s no new insight but walking across Northumberland I found what the saints knew was true for their own age in the places wherein they walked: a Christlike church is the Christian social ethic and ever our calling.

VIEW A SAMPLE COPY
Subscribe
@ cruciblejournal
Tue 02 Aug @ 09:34
"With this anniversary issue on Beveridge’s report, our intention is not to create an image of a ‘golden age’ of we… https://t.co/MO0Dc7bpMk
Follow us